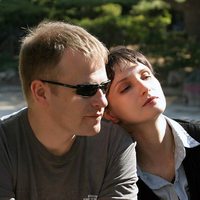 Mikhail Garmash was born in 1969 in Lugansk, Ukraine. He began to draw at the age of three and at the age of six he began his professional art education at the Lugansk Youth Creativity Center. The teachers sent the works of the gifted boy to various exhibitions in Ukraine, Russia, Czechoslovakia and Hungary. He received first prizes at several art competitions: in 1977 in the city of Lugansk (for the best poster), the International Youth Competition in 1978 in Czechoslovakia, the International Thematic Competition dedicated to the art of the circus in 1978 in Hungary. In 1987, Mikhail was entrusted to deliver a farewell speech at the graduation from the Lugansk Republican Art School, and from the next academic year he returned here as a teacher. From 1989 to 1991, Mikhail served in the army, and in 1997 he graduated from the Art Academy of St. Petersburg.

Inessa Garmash (nee Kitaichik) was born in 1972 in Lipetsk, Russia. From an early age, the girl showed great abilities in ballet, gymnastics and music. Inessa attended classes in these three creative disciplines at once, and after graduating from the music and ballet school, she entered the Lugansk School of Fine Arts in 1987, she was then 15 years old. At the age of seventeen, as the best graduate of the year, she was admitted to the Lugansk Republican Art School.

Mikhail met Inessa when he arrived in Lugansk on a two-week vacation from the army. They met at the bus stop on the last day of his vacation. Love at first sight! The next day he was supposed to return to the unit, but did not return, since he was painting it! When he finally returned to the unit, he was arrested, but did not receive punishment, as the command was imbued with the story of their acquaintance and love. Now they are painting together. Often Inessa and their daughter Polina are themselves depicted on canvases.

«We started working together after one case when our daughter decided to "fix" her father's painting. And the picture was supposed to be shipped to a foreign exhibition in the evening. In order not to upset my dad, I had to creatively rework my daughter's scribbles. In general, the picture was sent to the exhibition and the exhibition was wonderful - the public really liked the joint picture! Since then, we have been working together, painting, creating stained-glass windows and mosaics, and visiting exhibitions all over the world together.»

Married couples are relatively rare among acting artists. Harmonious couples are even rarer. And it is extremely rare for those who sign the fruits of joint creativity with a common signature. Any such family interaction sincerely pleases. Here is the very necessary example of the correct relationship between a man and a woman against the general “normal” background of their frequent widespread mutual reproaches and claims. An example of support and creative mutual enrichment, instead of the usual look and ear of swearing between a woman and a man, proving a one-sided position "who is better." In this case, the ideal Unity is better, resulting from the two Beginnings created by nature that complement each other! Today Mikhail and Inessa Garmash are known as two of the best romantic impressionists of our day.

Garmash Mikhail and Inessa: where are the paintings of artists?

Mikhail and Inessa Garmash collaborate with galleries in Russia, USA and France. 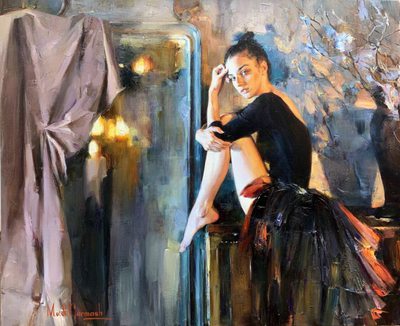 In a black pack - oil painting
In Stock

Author's oil painting ❀ In a black pack ❀ is a wonderful decoration for the interior of your hom.. 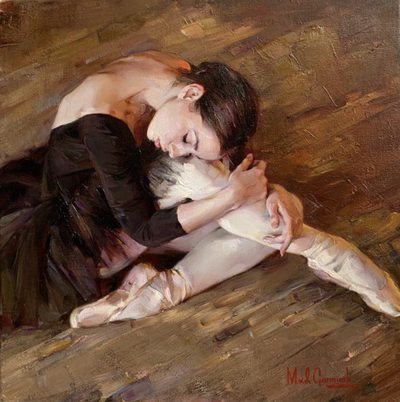 Author's oil painting ❀ Ballerina ❀ is a wonderful decoration for the interior of your home or o.. 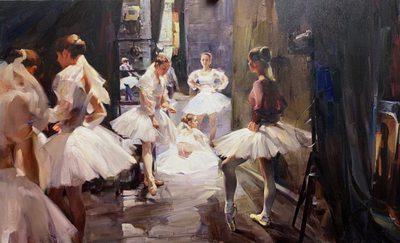 Behind the scene - oil painting
In Stock

Author's oil painting ❀ Behind the scene ❀ is a wonderful decoration for the interior of your ho.. 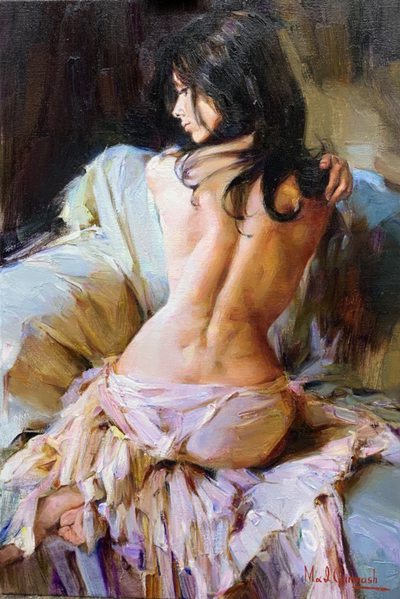 On the sofa - oil painting
In Stock

Author's oil painting ❀ On the sofa ❀ is a wonderful decoration for the interior of your home or..

Author's oil painting ❀ Red dress ❀ is a wonderful decoration for the interior of your home or o..
Showing 1 to 5 of 5 (1 Pages)