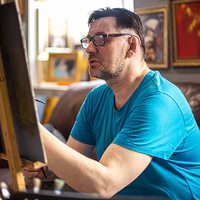 Dmitry Yakovin was born in Vladivostok in 1969. In 1995 he graduated from the Repin Academy of Arts, drawing department, and also studied at the Academy of Arts in West Berlin. Since 1992, Dmitry has been a member of the Union of Artists of Russia, later the artist was admitted to the London Imagination of Art Club, where he was recognized as the best artist of 2005. Dmitry Yakovin is the author of the genre of microrealism, a direction he created several years ago on the basis of surrealism. Surrealism is considered a difficult, gloomy and sometimes even depressing genre, but Dima clearly demonstrates that a fictional and sometimes not entirely logical reality can bring bright and positive emotions.

«This is a whole country, a country where there are a lot of characters, because I have not only gnomes. There are geeks and babettes. I must say, many paintings are connected with babette: I have her and the barber visits her, and suitors come to her. Petersburg is also unusual for me, because I have a lot of airships flying in the sky, all kinds of strange ships...»

Dmitry's heroes are microrealists, tiny human-like creatures, a cross between fairies, gnomes and brownies, living in an ordinary, at first glance, world, surrounded by the most ordinary objects. They can be found in the garden, under fly agaric mushrooms, on the kitchen shelf, in the clearing, busy sharing the dug up carrots. They have pets, mostly imposing, lazy and terribly funny cats. All together they make up their own special world, and, despite the difference in appearance, they are very reminiscent of Dima himself - they are just as unusual, original, sometimes funny, sometimes sad, but always very kind. Dima works hard and with pleasure, and with each new work his microrealists gain more and more confidence and vitality, so that the viewer has practically no doubts about their reality.

Yakovin Dmitry: where are the artist's paintings presented?

Currently, Dmitry Yakovin constantly lives and works in St. Petersburg, although he gained wide popularity abroad: in Europe and America. His works are in museums and private collections in Canada, France, Germany, Russia and America.

What exhibitions did Yakovin Dmitry take part in? 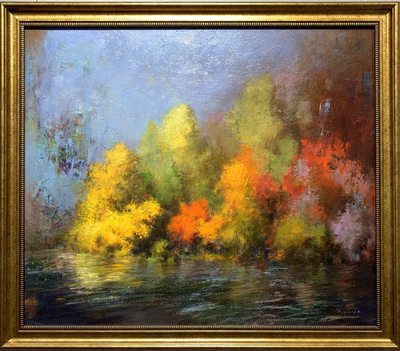 Author's oil painting ❀ Autumn ❀ is a wonderful decoration for the interior of your home or office f..
Popular 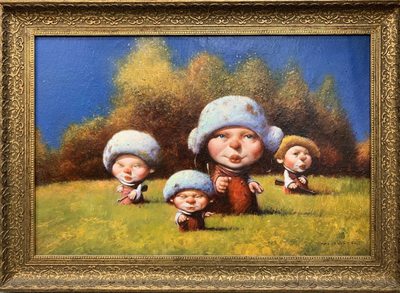 The hunters - oil painting
In Stock

Author's oil painting ❀ The hunters ❀ is a wonderful decoration for the interior of your home or off..
Showing 1 to 2 of 2 (1 Pages)