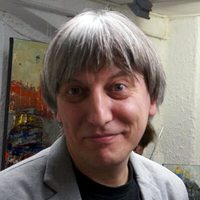 Alexander Volkov was born in Tashkent in 1964. Then his family moved to Leningrad, where Alexander took exams at the Serov School, but did not enter it, and this limited his art education. He graduated from the technical school of marine instrumentation, then in his life the army and work follow, which quickly gets boring. And he begins to paint, sells them on Nevsky Prospekt near Catherine's Garden. Since 1989, Alexander Leonidovich has been a member of the Association of Free Artists of St. Petersburg, which arises at the library named after Alexander Blok. Volkov considers this moment of acquiring the social status of an artist to be very important in his creative biography. Alexander says that Matisse and Van Gogh, as well as Chinese painting and Japanese engraving Ukiyo, influenced the formation of his manner in painting. The masters of modernism taught him the generalization of form and immediacy in addressing contemporary life.

«There should be nothing superfluous and nothing secondary in the works, and each fragment of the canvas should work as an independent picture. It is necessary to forget about the usual form, to understand that the main thing is not the image of objects, but an understanding of how they are related to each other. This connection is comprehended intuitively, for this it is necessary to move away from oneself, discard logic, and then the drawing, the lines will begin to appear on their own. It remains for the artist to concretize the form arising from them.»

The creative style of the artist resembles the "expressionist aesthetics". In the works of Alexander, the spontaneity of the sketch is important as the basis and general backbone of the picture. No less important is the sub-painting layer (“background”) of the canvas with its nervous lines and strokes, expressed in the technique of scratching. On the whole, as is often the case with good artists, their works are liked after a long time of peering, when the nuances of texture, the rhythm of the composition, and the overall color scheme begin to work. Semi-abstract painting by A. Volkov is based on contrasts of bright saturated spots and gray or green background. The artist loves to depict the city, its everyday life, cars and citizens. He has a special vision of the city: the strict beauty of the architecture of the St. Petersburg center in his works is in harmony with the bustle of traffic, with a network of wires in the narrow gap of the city sky and bright interspersed with traffic lights and road signs.

Volkov Alexander: where are the artist's paintings presented?

What exhibitions did Volkov Alexander take part in? 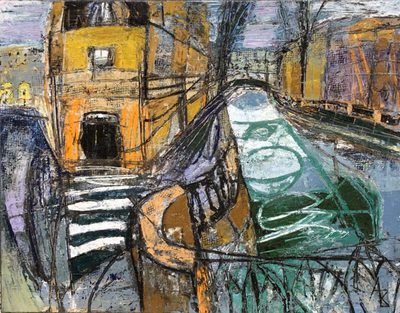 Patterns on the water - oil painting
In Stock

Author's oil painting ❀ Patterns on the water ❀ is a wonderful decoration for the interior of your h..
Popular 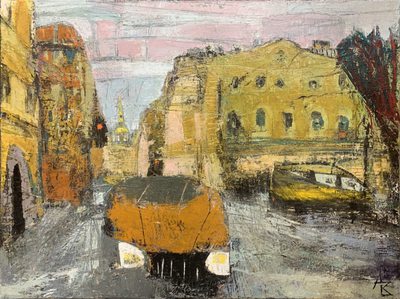 Author's oil painting ❀ Taxi ❀ is a wonderful decoration for the interior of your home or office fro..
Showing 1 to 2 of 2 (1 Pages)