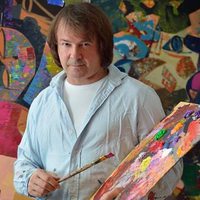 Igor Tcholaria was born on September 11, 1959 in the small Abkhazian town of Ochamchiri, located on the Black Sea coast. At the age of 12, the family discovered talent in him and the boy was sent to an art school in Sukhumi, from which he graduated in 1976. Then there was the Mukhina Higher Art School in Leningrad, where Igor Cholarii was extraordinarily inspired by the French Impressionists, as well as by Picasso and Modigliani, not particularly welcomed by official Soviet art. In the end, Igor had to leave the academic walls, reminiscent of dungeons, and look for his own ways in painting. Now Igor lives and works in St. Petersburg, as well as in Belgium on the coast of the North Sea.

«I was able to synthesize what the French had and what was characteristic of our school of painting. I'm trying to combine different traditions. I love Modigliani very much, and if you look at my female portraits, where I start from Modigliani, you can see the Georgian school of painting, and the Russian one, and the influence of Japan.»

The world of Igor's paintings does not strive to be like reality. People-dolls, faces-masks - this semi-playful extravaganza fully corresponds to the riot of colors that embodied it. However, a different kind of reality reveals itself with all persuasiveness: the world of feelings, expressed in color and line. It is not necessary to unmask an actor in order to perceive the truth of his performance. The picturesque world of Igor Cholarii is real, it is bright and cheerful, and everyone can enter it. The artist refers to the legacy of the great masters of French impressionism and post-impressionism, in particular P. Picasso and A. Modigliani. But along with the European tradition in his works, there is a decorative effect of the “Mukhinskaya” school, combined with a bright palette of Georgian painting. The master's favorite themes are theater and circus. A special place in the work of Igor Tcholaria is occupied by a female portrait.

Tcholaria Igor: where are the artist's paintings presented?

He was invited by the largest Belgian gallery "Robinson" ... the artist is still closely associated with it today. Tcholaria's works were successfully exhibited by the famous Roy Miles in his gallery on Bruton Street in London. In Holland, I.Tcholaria has been working for many years with the gallery "Mark Piet Visser" from Den Bosch. In recent years, Igor won an international competition and painted two large panels for the giant cruise ship Queen Mary Two.

What exhibitions did Igor Cholariya take part in?

His exhibitions were held in Russia, Italy, Finland and the Netherlands. British documentary filmmakers even made a film about Igor's life.

Author's oil painting ❀ Dreams ❀ is a wonderful decoration for the interior of your home or offi..

You are my guitar- oil painting
In Stock

Author's oil painting ❀ You are my guitar ❀ is a wonderful decoration for the interior of your h.. 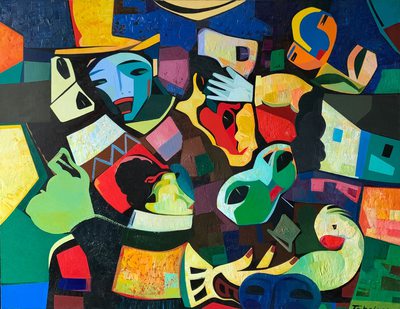 Author's oil painting ❀ You are my guitar ❀ is a wonderful decoration for the interior of your h..
Showing 1 to 3 of 3 (1 Pages)