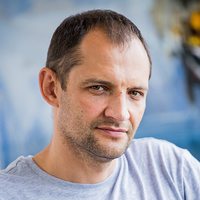 Andrey Selenin was born on November 2, 1973 in Volgograd. In 1983 he moved to the Crimea, where he entered an art school. In 1991 he entered the Crimean Art College. Samokish in the city of Simferopol, where he studied in the workshop of N.S. Morgun. From 1996 to 2002 he studied at the St. Petersburg Institute of Painting, Sculpture and Architecture. I.E. Repina. V.I. Reikhet, V.V. Pimenov, N.N. Repin, N.S. Lysk and N.D. Blokhin. Currently the artist lives and works in St. Petersburg.

«Why do we take abstract painting less seriously? Costs of academic study? In general, such a setting? Say, anyone can "spread" like that, but try to draw like that. For some time now, the question has really been spinning in my head: where does the concept of realism come from in the visual arts? After all, not in all types of art it is - in music it is not. There is no such task to convey the living sounds of nature as accurately as possible, albeit artistically. Initially, everyone agreed that any sounds extracted from instruments and their combinations do not occur in nature, that is, it is an abstraction, and this does not bother anyone. And in the fine arts, it’s downright war: realism versus abstractionism. If you think about it, it becomes clear: in music, the task was to convey a feeling, some movements of the soul, which are also difficult, and for the most part, impossible to express in words. In the visual arts, in addition to this task, there was also the task of accurately conveying the image, most likely associated with the desire of a person to preserve, always have an image of an object he liked nearby, for example, a portrait of a person, or the desire to stop time in this image, fix something that may disappear or change. And these two tasks conflict, interact, combine in the fine arts, and, accordingly, appear in realistic and abstract painting.»

Andrey is a successor to the traditions of Russian impressionism, drawing inspiration from the beauties and splendor of his native land. Therefore, the artist's landscapes and still lifes are filled with love, sincerity, ingenious simplicity and incredible clarity. Passionately and confidently applying smears of contrasting colors, the artist creates fantastic paintings on canvas - true masterpieces of modern painting, forcing critics and art historians to tacitly recognize his talent. With a confident, wide, chopped stroke, the artist skillfully creates spectacular pictorial images.

Selenin Andrei: where are the artist's paintings presented?

At present, Andrey lives and works in St. Petersburg, being an annual participant of exhibitions organized by the Union of Artists.

What exhibitions did Andrey Selenin take part in?