Paintings on the canvas of Irina Alexandrina 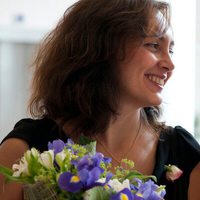 Born in 1965 on 31 of january. In 1977 Irina moved from Moscow to Saint Petersburg. In 1983 she graduated Leningrad Secondary Art School located in the Imperial Academy of Arts. A year later she entered the Repin’s Institute of art, sculpture and architecture located in the Imperial Academy of Arts. During her studies at the Faculty of Architecture, she attended a course in painting technology. Having received a diploma, Irina was actively engaged in painting, exploring various techniques, materials and plots. As a result of a long creative search, the views of the city became the main genre of hers. It was the images of views of St. Petersburg at the edge of the 18-19th centuries that brought such fame to the artist. Graceful ladies with fans in their hands walking with their cavaliers, carriages with horses in the very center of the city on the Palace Square or Nevsky Avenue, as well as the incredibly transmitted atmosphere of that "old St. Petersburg" brought fame and recognition as a unique artist Irina Alexandrina.
Irina's biography includes more than 10 solo exhibitions not only in Russia, but also abroad: in Barcelona, Prague, Florence, Berlin, Los Angeles. In 2010 during the official visit of the President of Russia to the United States, Dmitry Medvedev presented one of Irina's St. Petersburg landscapes to Stanford University. In addition, her paintings are in the corporate collections of leading banks, as well as in private collections around the world

Painting "A walk"
In Stock

Painting "At the bronze horseman in winter"
In Stock

Painting "Lady with a hat"
In Stock

Painting "On a crowed avenue"
In Stock

Painting - At the Bronze Horseman
In Stock

Painting - At the Winter Palace
In Stock

Painting - Saviour on the spilled blood
In Stock

view Saviour on the spilled blood..

Painting -Nevskii prospect
Out Of Stock