Portrait - a genre of painting about human nature 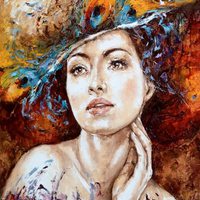 A special genre of fine art dedicated to the transfer of the image of a person is called a portrait. Having gone through the depth of centuries, the direction has not lost, but has significantly increased its demand. We will talk about the limitless possibilities of portraiture in this article.

Features of the genre

Translated from French, portrait means “transmit”, “portray”. Most often we call a portrait an image of one person (or two, maximum three people) on a canvas or a sheet of paper. The artist can apply various styles, visual techniques, various tools and personal empathy to create portraits that firmly hold the attention of a significant audience.

Portraits vary in composition, size, foreshortening. They may be:

According to the location of the posing, portraits of full-face are distinguished, in profile or with a head turn of three quarters to the left or right. The last angle is traditionally perceived as the most mysterious.

The oldest element representing the portrait genre was found during excavations near the city of Angouleme in France. It depicts in chalk the contour of the human face with the designation of all necessary details. This finding allows us to conclude that the portrait genre already existed 27 millennia ago. Later images of human profiles were found in caves in Italy and the Balkans.

The heyday of the portrait genre in painting was preceded by a sculptural period when stucco images of faces were widely practiced. The later archaeological finds are, the more obvious is how the art of copying characteristic human features has improved. To a considerable extent, the development of the portrait genre was served by religious rites, in particular, the Egyptian traditions of the burial of noble people. Portraits and masks of the deceased symbolized their divine destiny, and the process of their creation was based on the study of the smallest strokes of the human face, so that the image was as similar to the original as possible.

Variations of the genre

Creating a portrait requires the artist not only to follow the laws of the genre, but to realize his own ideas. So the notorious creative approach affects and masterpieces are born, the only indisputable condition of which is the similarity with the prototype. Portraiture is open to experimentation and encourages the use of the latest technology. At the same time, along with modern variations, styles that came to us from the distant past continue to be relevant.

An ageless classic is a portrait of oil paints on canvas. The warmth and originality of this area is combined with the ability to organically convey a personal atmosphere. Contemplating the work of famous artists, we seem to be personally present next to the posing, have the opportunity to touch his things, to appreciate the surroundings with our own eyes ... Such involvement ensures the style is always popular in modern society.

An interesting technique for creating portraits by rubbing paint with a practically dry brush. As a result, an image is created from soft, smooth lines. Such portraits look very harmonious and expressive.

The direction of historical portraits is used in various states and can be considered timeless. In different periods, the leaders of the era sought to capture themselves in a memorable image for subsequent generations. An offshoot of this type can be considered ceremonial portraits created in emphasized bravura traditions.

The notes of theatricality and fictional details are characteristic of a costumed portrait, which has gained popularity in modern times due to the ability to feel this or that era, push the boundaries of habitual existence, realize this or that image in a short period, transferring it to infinite space. This perspective attracts many representatives of modern society, as a result of which interesting works of painting are born.

Another noteworthy type of portrait is the image of a person using literary techniques. In the presence of writing skills, verbal transmission of the image has a rich palette of shades. Thanks to this, readers have the opportunity to visualize the hero of the work according to only one description. Recognized virtuosos of literary portrait are M. Gorky, C. Dickens, G. Maupassant and others.

With the development of photography, the art of creating portraits has gained a new promising direction with its audience of loyal fans. Portrait photographs can imitate the features of hand-drawn images, be masterfully processed by modern programs, be black-and-white or color - an abundance of funds only increases the popularity of this type of art in our society.

Creating portraits requires not so much an understanding of psychology as the ability to feel a person. Image of characteristic features, transfer of emotions, expression of eyes, semantic component of a smile - not only a recognized portrait painter, but also a person who is genuinely in love with the source of his inspiration can do all this through a drawing.