Animalism is a popular genre in the visual arts 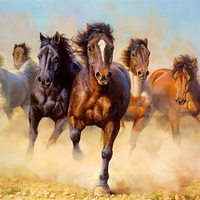 Animalism is a specific direction in the visual arts, which shows the life of representatives of the fauna. That is, the subject of the works of painters and sculptors-animalists is the animal world (animal translated from English “beast”). Actually, the specificity is not so much the direction itself as experiments on this topic within the framework of art genres. Unity with the outside world, life affirmation, the perception of being and the universe through the prism of harmony between man and wildlife is what drives the brush of these masters.

Before becoming recognized, animalism went through a thorny path of formation. She had to face a lack of understanding on the part of the official church, aversion to an ignorant society, and bans from short-sighted governments...

In their best works, animal lovers at all times tried to convey to the connoisseurs the accuracy of the image, adding to the image their own vision of the surrounding reality through conventionality or naturalism. Since ancient times, the animal has been endowed with human properties, actions, emotions. The roots of totemism go back to the tribal system, when in the cave paintings Neanderthals depicted the physiology of animals, their grace and authority, as well as a threat to a primitive man.

From the prehistoric era to antiquity

Statues of wild animals, animalistic mosaics and ceramics are important components of historical science, ethnography, and the culture of the population of Ancient Africa, America, and Asia. For example, in Egypt, pagan deities painted with bird heads. Decor was applied to the vases of Hellas in the form of images of our smaller brothers. Animalism was somehow present in the everyday life of the peoples of Mesopotamia, India, and other southern states.

Despite traditional reactionaryism, the Middle Ages enriched images with fabulousness and allegory. The cult of the dog belongs to this period. In particular, the famous Venetian artist Veronese introduced the canine image into Christian motifs, in the masterpieces of which stray dogs follow Christ.

The heyday of the Renaissance and the New Age

Representatives of the Renaissance, as far as possible, captured animals from nature. This trend was especially widespread in the 17th – 18th centuries in Russia, Italy, and Holland. A dynamic beast now and then comes across on the canvases of Leonardo da Vinci, Rubens, Rembrandt. In the Russian tradition, a special mission in the framework of his work was assigned to domestic animals by the master of brush of Greek-Ukrainian origin, Alexei Venetsianov, who praised the peasant life.

In the element of technological progress

The 19th – 20th centuries pushed animals away from romance and poetic pathos in the depiction of animals. All their inherent features seem so realistic that it is often difficult to consider the hand of the painter, his author's style. A bit later, hyperrealism developed - a bizarre style with minor details in the foreground.

Animalists of the world and Europe

One of the most striking examples of animalistic ancient Asia - the creation of the Chinese esthete Yuanji, who lived in the distant XI century. Despite the primitive customs of the aforementioned time, this name reached the descendants according to models imbued with the spirit of the eastern fauna. His creed was continued in the minds of the Ming Dynasty emperor named Xuande, who recreated the appearance of dogs and monkeys made no less than the meaning of life.

The Flemish master Frans Sneijders (XVI – XVII centuries.) Is recognized as a notable animal artist. He specialized in creating still lifes with the attributes of European hunting. From under his brush came out brilliant specimens that today can be found in private collections and expositions of the Old World. Among them, a couple of paintings stand out - “The Fox and the Cat” and “Deer Hunting”.

Among modern animal painters, experts are increasingly calling Robert Bateman from Canada. His bison, elephants, deer and predatory cats seem to be looking at us from an ajar window into nature.

Representatives of the Russian school of painting

About a hundred or two hundred years ago, animalism was not as popular as it is now. Nevertheless, pre-revolutionary and Soviet Russia opened up many talents for civilization. Vasily Vatagin was a true fanatic of the fauna world. His graphics, watercolor and pencil are piercing. In this sense, the works of Valentin Serov, “Oxen,” “Bathing a Horse,” as well as illustrations for Ivan Krylov’s fables, are magnificent. The artist who preferred genre diversity is Konstantin Savitsky. Evgeny Charushin, Konstantin Flerov, Andrei Marts are typical representatives of the Soviet mass culture.

The animalistic painting of today involuntarily merges with photo art. Along with personal mastery, computer technologies are sometimes used to write such paintings. Well, and, of course, one cannot do without love for living beings. Artists as if knocking on a human heart with a request: "Take care of this fragile world that we can lose."